The One With The Goals

Here it is: the post for which you've been waiting. The mother of all goal posts, AKA my 2019 To-Do list.

Usually, this is a two-part post. The first part is where I review the previous year's goals and tell you how well they went, but as I only managed to accomplish one thing on that list last year I didn't really feel the need to devote an entire post to it.

But here's the thing. The one 2018 goal I accomplished was to publish Second Nature, which was my number one writing goal for last year. And as that goal goes, so goes my year. So the fact that I didn't manage to do anything else I had wanted to do doesn't bother me as much as it normally would because I did this: 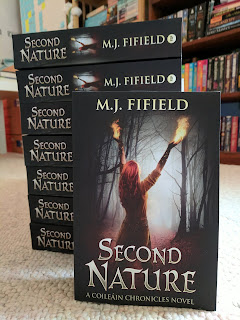 Which means my 2019 goal list will look awfully similar to last year's list...with one notable exception. I can't wait to find out what the new Number One Goal will be.

I'm currently about three months behind where I wanted to be with this WIP at this time, so I may be setting myself up for a big, fat failure here but I'm going to attempt to do this all the same. Go big or go home, right?

In the plus column, I may have actually hit upon a possible workable ending. I know I've said that before, but I think I may mean it this time. Fingers crossed!

This is the collection of sarcastic haiku I wrote about my day job. It fell by the wayside last year (too many other things going on) and that may well happen again this year, but I'm still going to try.

Full Circle is the third book in my fantasy series. It's kind of in a state of limbo right now. I feel like the original plan I had for it no longer works, but I don't yet have a new plan in place. Which means, right now, this is a big, fat mess. Anyway, I'd like to finish the first draft this year, but I think I would really be okay if I only managed to figure out what that first draft should be.

I would like to read 52 books this year. I was a good ten or eleven books short of this goal last year,  but I'm sticking with the same number this year. One book a week doesn't seem like it should be too difficult.

This can be in walking, running, biking, kayaking, whatever. It will most likely just be walking, however, because despite my best intentions I never do any of the others.

2. Get back into the yoga habit

I firmly believe that yoga can help with my chronic back issues. I just need to stop being so damn lazy about it.

My sleep schedule/patterns/whatever was/were obliterated in 2018 because...reasons, and I believe it really screwed with my productivity. I know. Imagine that, right? So in 2019, I would like to attempt to correct this issue. Or figure out a way to just manage my time better. Whichever's easier.

And on that note, I'm outta here.

Happy Monday, everyone. Have a great week.

Thanks for stopping by!