Hello, everyone. Hope one and all had a lovely, drama-free holiday.

In my last post, I stated that today I would be sharing some news, making a big announcement, something like that. And I am. It's just...I feel as though I should preface the big announcement by saying that it's a big announcement for me. For anyone else, it probably wouldn't be. It'd be more of an "Oh, by the way" afterthought, or something, but for me, it's a Big Deal. In large part due to the fact that what I am about to tell you terrifies the living daylights out of me. The dead daylights, too. (If there is such a thing.) All the daylights are terrified out of me.

But it's happening anyway.

Because as my good friend, Eleanor Roosevelt, once said, "You must do the thing you think you cannot do."

What is this terrifying thing, you may be asking yourself. Well, I'll tell you. It's this: 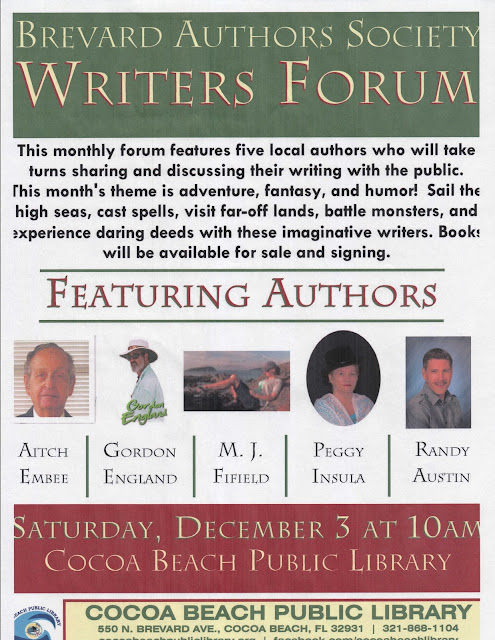 Recognize that name in the middle? (You may recognize other names, as well. I don't know.) You know what it means?

This Saturday, I will be making a public appearance.

You know, as an author. Not just me going out to buy groceries or anything like that (which is terrifying in a completely different kind of way...). Neither is this public appearance one of those events like the signings I've done in the past where I can blend in with other authors and only make eye contact with the people who actually approach the table under which I'm hiding. No, this event will require me to stand up in front of an unknown number of persons, and actually talk to them. About myself. And my work.

And I am terrified.

And I cannot do either of those things on Saturday. (At least I don't think so. Right?)

To the best of my knowledge, I will have approximately fifteen minutes to fill. After which time (provided I haven't already fainted), I will take questions. That I will be expected to answer. And do all of this in a way that won't make me sound just...really stupid.

Not sure how I will pull any of this off, but I imagine that it will involve me spending mucho time practicing in the mirror, the shower, the car, and probably other locations, too, over the next five days.

Just as soon as I figure out what to talk about.


Thanks for stopping by today! See y'all next time...

Email ThisBlogThis!Share to TwitterShare to FacebookShare to Pinterest
Labels: Glamorous Life of an Author

Things Which Make Me Happy

Hey, y'all remember when on Monday when I was all, "Hey, I'm totally going to rock these edits and knock this thing out by the end of the month!"?

Yeah. That's not going to happen now. The universe caught wind of my plan and my cautious optimism and came to smack me down for it.

So today, I am listing a few things which have and will make me happy in the past, present, and future.

May they make you happy, too.

THE RETURN OF ECHO EFFECT

Echo Effect is a webcomic created by amazing artist and storyteller Heather R. Holden. I came across it a couple years back during the A to Z Challenge and have been addicted to this story and these characters ever since. It's been on haitus for a little while, but is making its return TODAY. I'm so excited, I must use this gif:

Next up is a little something very near and dear to my heart...

THE RETURN OF GILMORE GIRLS

Gilmore Girls, in the event that you haven't heard of it, was a television series that ran from 2000-2007. It told the story of a single mother and her daughter living in a quirky Connecticut town. It is one of my all-time favorite shows, right up there with Firefly and Buffy The Vampire Slayer. (Yeah. That's how much I love it.) When the show ended, I was pretty bummed. Partly because it's one of my all-time favorite shows, but also partly because the last season was, overall, a big disappointment. Either way, I really wanted more.

And next Friday, at 3:01am, EST, I will get my wish. Four brand new 90-minute episodes (written and directed by the show's original creators, nonetheless) will be released on Netflix. Meaning, I will have six more hours of Gilmore awesomeness.

Now, my original plan for this momentous occasion was to devote an entire week of blog posts to the show, but as that didn't work out (yes, it's all right if you breathe a collective sigh of relief) here instead are a couple of clips/trailers:

So much awesome. So little time.
So, if you're looking for me next Friday between 3am and 9am, I'll—You know what? Better not to look for me until at least 10am next Friday. I'll need at least an hour to cry all the tears.
I'M SO EXCITED!!!
But for now, I need to go back to work and take advantage of every last second I can squeeze out of the rest of this terrible year.
I'll be taking next week off from blogging (You know, because the two whole posts I've managed to put together this month were sooooo taxing), but I'll be back again on Monday, November 28th, with some big news. Well, at least big for me. And a little scary. A lot scary. Well, at least for me.

Have a great holiday, everyone. See you in a week. And a half. Or something like that.
Posted by M.J. Fifield at 7:00 AM 14 comments:

Not to be mysterious or cryptic or anything, but I don't particularly want to get into the reasons why this year has been so rough, so, just know that it has been, I guess. I'm only mentioning it now because it's kind of the driving force behind me writing this post at all.

So instead of talking about things about which I don't want to talk, I'm talking about goals—More specifically, I'm talking about how I have had to let go of a lot of the goals (like, all of them, except for one.) I set for myself back in January, including my biggest, most important (to me) goal of all—releasing my second book.

Which I really should have seen coming. As I've said before (and will say again, I'm sure), it's not an M.J. release unless I screw it up the first time around.

So, fine. Whatever. We accept the things we cannot change and move on to Plan B.

Which is, to say, salvaging as much of the year as I can in the time I have left. (As it relates to my novel, I mean. That healthy eating goal is toast.)

I have spent much of this year editing and revising my intended release. I can't get it to the point where I'm happy with it. (Or, as happy as I ever get with my own writing.) My critique partners have had good responses to the chapters they've read, and my three beta readers gave it very high marks, but I'm not seeing it. Not yet.

As such, I've been working my way through another round of revisions. I'm way behind the pace I had intended to set, but again, it's an M.J. release, so of course I am, but I'm trying very hard to get caught up.

Well, it's too late to get caught up. How about this: I'm trying very hard to just be finished with these never-ending revisions (at least until such time as the proofreader gets his or her hands on it and tells me everything I've missed) by the end of November.

On paper, it's totally doable. I think. I have fourteen chapters left to revise, and seventeen days in which to do them. Each chapter is in various stages of completion. Some only need a few lines tweaked. Some require more rewriting. One scene contains what I am pretty damn sure is the most terrible sentence in the entire history of sentences. I also want to add one brand new scene, maybe two.

And I want to do it all by November 30th.

Hmmm. Maybe it's not doable.

But I won't know until I try.

So in the hope of giving Plan B the attention it requires, I am reinstating my "When It Is Acceptable To Interrupt The Writer At Work" guidelines that I generally pull out when I am participating in NaNoWriMo.

WHEN IT IS ACCEPTABLE TO INTERRUPT THE WRITER AT WORK


1. The mobility-challenged German shepherd has fallen, and you cannot get him back up on your own.

2. The house is on fire. (May also be extended to include the imminent arrival of a hurricane (Cat Three or higher) and/or tornado. Because we live in Florida, where both these things are possible. And possibly probable.)

3. Joss Whedon is at the door. (May also be extended to include Benedict Cumberbatch. If it's anyone else on my list of favorite celebrities, however, politely ask them to come inside and wait for a break.)

4. There is an actual, legitimate emergency not mentioned above. (Please see addendum below)

Addendum A: the following things do not constitute an emergency:

1. Any YouTube video you think is funny. I guarantee you that I will not find it funny.

3. Any tweet by that guy in Australia you follow who's always posting the pictures of giant spiders, snakes, or crazy angry kangaroos. (Actually, let's just make that an always thing.)

5. You want to know what's for dinner. You have two hands and phone. You can order pizza yourself.

And on that note, I'm going back to work. Hope everyone has a great Monday, and a fantastic week. See you next time.