In the majority of my posts for the last six months, I have spent a not-insignificant amount of time on this blog vocalizing my...not-love for various aspects of Florida. (seriously, lizards—go live in someone else's mailbox. The neighbors are tired of listening to me scream.)

So today I thought I might tell you about something here in Florida that I quite actually love. A lot. Something I wouldn't have if I hadn't (gulp) MOVED TO FLORIDA.

Our first walk-through of our house was done via Skype. Our realtor showed us one of the bedrooms and said how she thought it would be a great room for my office because it had these two great windows that would offer me inspiration. I agreed with her until she showed us the other room. It only had one window, but the closet was freaking amazing (translation: I could fit a bookshelf into it) and I laid claim to it then and there.

I totally made the right choice. Because I have the most amazing office space now. I mean, seriously, I am completely spoiled by this room.

After the movers finally showed up, my office looked like this: 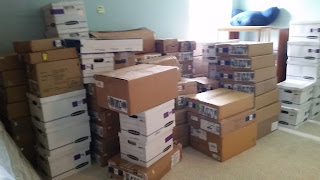 I didn't have a desk, either. My old desk was one made of that pressed particle board stuff, and every mover we spoke to said the same thing: it wasn't likely that it would survive the move. I guess pressed particle board stuff has a tendency to explode. Not, like, a literal explosion or anything. It just won't survive, I guess, unless it can be broken down enough, which my desk could not be.

So anyway, the point of that little detour was that I had to get rid of my desk.

It took a while to find a suitable replacement, but I finally found one I liked at IKEA. (As an added bonus, I got to make my first trip to IKEA!) It took three days for The Man to put it together (I'm really no help in these situations), but I really like the finished product: 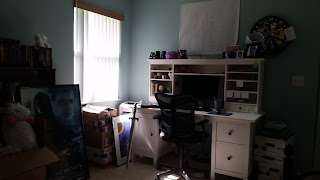 Next came the Big Ass Storyboard. I had to hound The Man for a while to help me put it up (I'm guessing he was still traumatized from the IKEA desk experience) but he eventually caved. 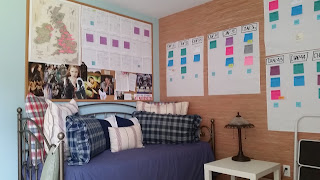 You can also see my other storyboard in the above photo because—that's right—this room is large enough with enough useable wall space that I no longer have to hang my story-plot storyboard in the dining room. (And The Man rejoiced heartily.) 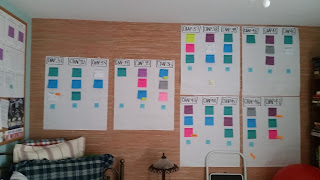 Of course now, I have to use a step ladder if I want to make adjustments to that top level, but I just kind of think that makes it even cooler.

The last picture I'm going to share with you today is the last wall in the office, otherwise known as Bookshelf City... 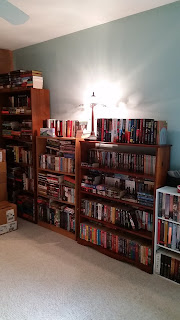 The sad/impressive thing is that that's not even all of my books. There's still, like, 8 boxes I haven't yet unpacked. Because I need more bookshelves. Or, according to The Man, fewer books.

But I've chosen the former. I just don't need the negativity inherent in the latter.

And that's going to do it for me today. Thanks for stopping by!