I didn't get much done last week. The Gator Girl had a medical issue that required constant supervision. As well as the cone of shame: 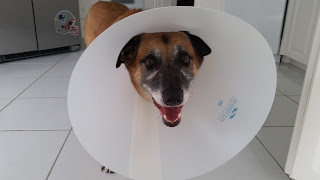 So basically, my week was spent saying "Stop it. Stop it. Don't do that. Stop it. No, don't! Why? Why did you do that! Stop it!" over and over and over again. I was only ever able to write when the Gator Girl was unconscious. If you're familiar with the Belgian Malinois, you'll know that they're seldom unconscious.

Seriously. I'm pretty sure in the next Mission Impossible movie, Tom Cruise will have to keep a Malinois calm and quiet. And not just any Malinois—my Malinois, who's an OCD-ridden, anxiety-prone basketcase with a couple extra shots of crazy.

Thankfully, she's better now, and needs far less supervision...just in time for Big to develop a medical issue of his own. You know, the kind that requires one to say, "Stop it. Stop it. Don't do that. Stop it. No, don't! Leave it alone!" 500,000,000 times a day. Of course, he's deaf and can't hear you say those things, but this house has never lacked for throw pillows.

The good news is that his medical condition does require less hands-on hovering than the Gator Girl's did. Also, he sleeps a hell of a lot more than the Gator Girl (Everything does. Including sharks, I think...), so perhaps this week I can get some more work in.

I am three scenes away from being finished with this draft of Second Nature. Five, if I decide I absolutely have to have those other two scenes I was thinking of adding, but that's all. Just three (five) scenes. They're all started; I just need to finish them.

Which leads me to my goals for this week:

Nothing more to be said about that.

I have spent so much time and money there since the big move, that they'll be giving me my own parking space soon enough, and sending me a postcard from the lavish vacation I've paid for. Here's hoping that Big's current medical condition fulfills our quota for a while. (But as he still has an un-diagnosed kidney condition, that's not likely.)