Or whatever passes for it.

Today's post comes courtesy of authors Kate Larkindale and Jolene Perry. (Be sure to check out their sites and their books!) Kate tagged me in the Writing Process Bloghop that's been making its way around the blogosphere while Jolene posted a similar themed post on her blog yesterday that I decided would compliment the first nicely.

And since I'm pretty terrible at talking about...well, everything, I thought I should welcome the opportunity to practice talking about writing and how I do what I do.

Shall we get started?

I am working on publishing my epic-ish (sorry...still uncomfortable with the 'epic' label.) fantasy novel, Effigy, and completing the first draft of Effigy's sequel, Second Nature.

2. How does your work differ from others of its genre?

A lot—not all—of the stories in the fantasy genre tend to be plot-driven. I try to make my stories more character-driven because I do believe character is king. Nothing against plot, because heaven knows that's important too, but I'm a character-driven reader.

Well, I'm a fangirl obsessed with sarcasm, medieval weaponry, and bucking the establishment. Me writing what I do is probably just a given.

4. How does your writing process work?

Some would say it doesn't. But for a more detailed look at my writing process, please refer to the questions and answers below...

I write fantasy, urban fantasy, YA, romance, and literary. If it strikes my fancy, I'll give it a go. Someday I'd like to write a spy novel.

2. How many books have you written?

Jolene's number was 31, which is so insanely impressive that I am embarrassed by my paltry number. Which is 6. Unless you count the two installments of my fantasy series that have been started but are a long way off from finishing. Then it's 8. Wait—9. I forgot about that really crappy romance novel I wrote in college. It'll never see the light of day, but I did write it. So 9, then.

Not yet. But I just might change that later on this year. Unless I've totally just jinxed myself by saying so. D'oh!

4. How long do you let an idea "simmer" before you start writing?

I think that answer depends upon the project. Some things I can just jump right into, but others need a little more percolating.

5. How much pre-planning do you do in the form of outlines, character sketches, maps, etc.?

It used to be none, like seriously, none. I never really planned anything, just kind of jumped into the deep end and went for it. These days, however, I have trended toward more plotting than pantsing. I have a six foot storyboard in my office (if you're curious, you can check out a post devoted to the details of that storyboard HERE) which contains maps, charts, a family tree, and a color-coded calendar. I now also have a second storyboard claiming all three walls of my dining room.

I don't know if the dining room storyboard should be considered a proper outline, but it does outline the story for me—where it's been and where it's (supposed to be) headed. The little index cards on the dining room storyboard are color-coded too. Each POV character was assigned his or her own color so I can tell at a glance which character is supposed to be running any particular scene. 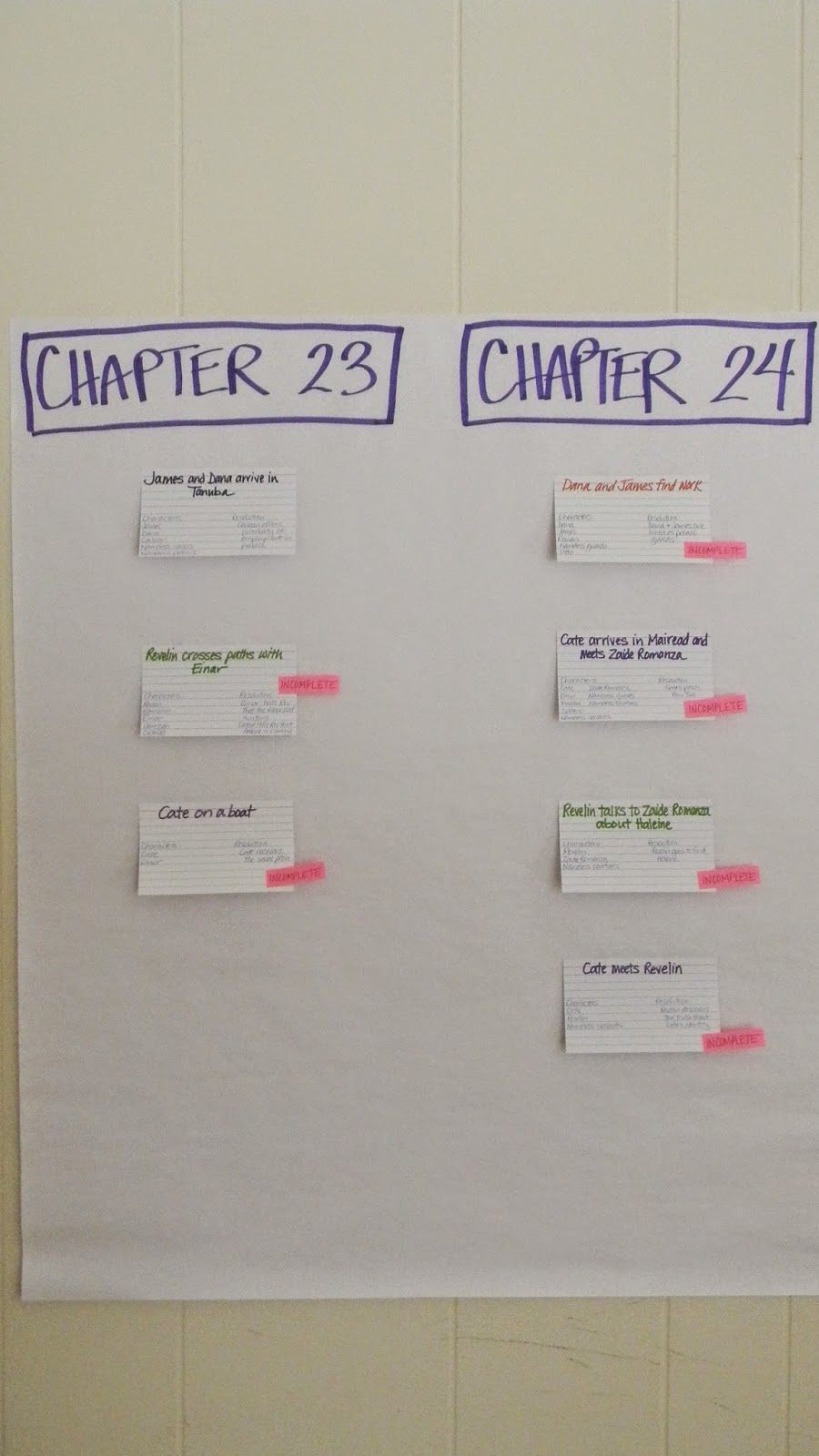 The above chart is where I'm currently at in Second Nature. The little pink post-its tell me which scenes are incomplete. The chart for chapters 25-26 has only two index cards on it right now—each listing an incomplete scene in its currently intended spot in the novel (But they'll likely end up moving. I find that happens a lot.) so I know where I'm aiming to go.

7. How many drafts do you usually go through before you're done?

I'd say three is probably average for me, but again, it really depends upon the project.

8. How long does it typically take you to write a first draft?

A long time. George R.R. Martin looked at me the other day and said, "Damn, girl, you write slow!" (please note: that is possibly not a true story. Though if George R.R. Martin and I did know each other, he probably would say that. Right before he handed me my restraining order.)

9. How long do revisions usually take you?

10. Are your revised drafts substantially different plot-wise from your first drafts?

Not usually, but in the case of Effigy, the answer is HELL, YES! The very first draft of the very first conception of this story is a long way away from where the final version has ended up. A lot of changes were made—for the better, of course. In fact, I would never, ever show anyone the very first draft of that story now because it's too embarrassing. The only way it'll ever see the light of day is if I were teaching English again and needed to make a point about the awesome power of revision. But, fortunately, that's not likely to happen.

At any rate...Have a great afternoon, everyone. Thanks for stopping by.
Posted by M.J. Fifield at 6:00 AM 56 comments: 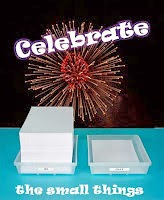 Today on My Pet Blog, I'm taking part in VikLit's weekly bloghop Celebrate The Small Things where participants share whatever it is they happen to be celebrating from the past week. Big things, small things—it doesn't matter. We celebrate it all.


Here is what I'm celebrating this week:

—Today is my beloved German Shepherd's 11th birthday. Later, we shall be going on a special car ride to get cheeseburgers because that's what we always do on Big's birthday. 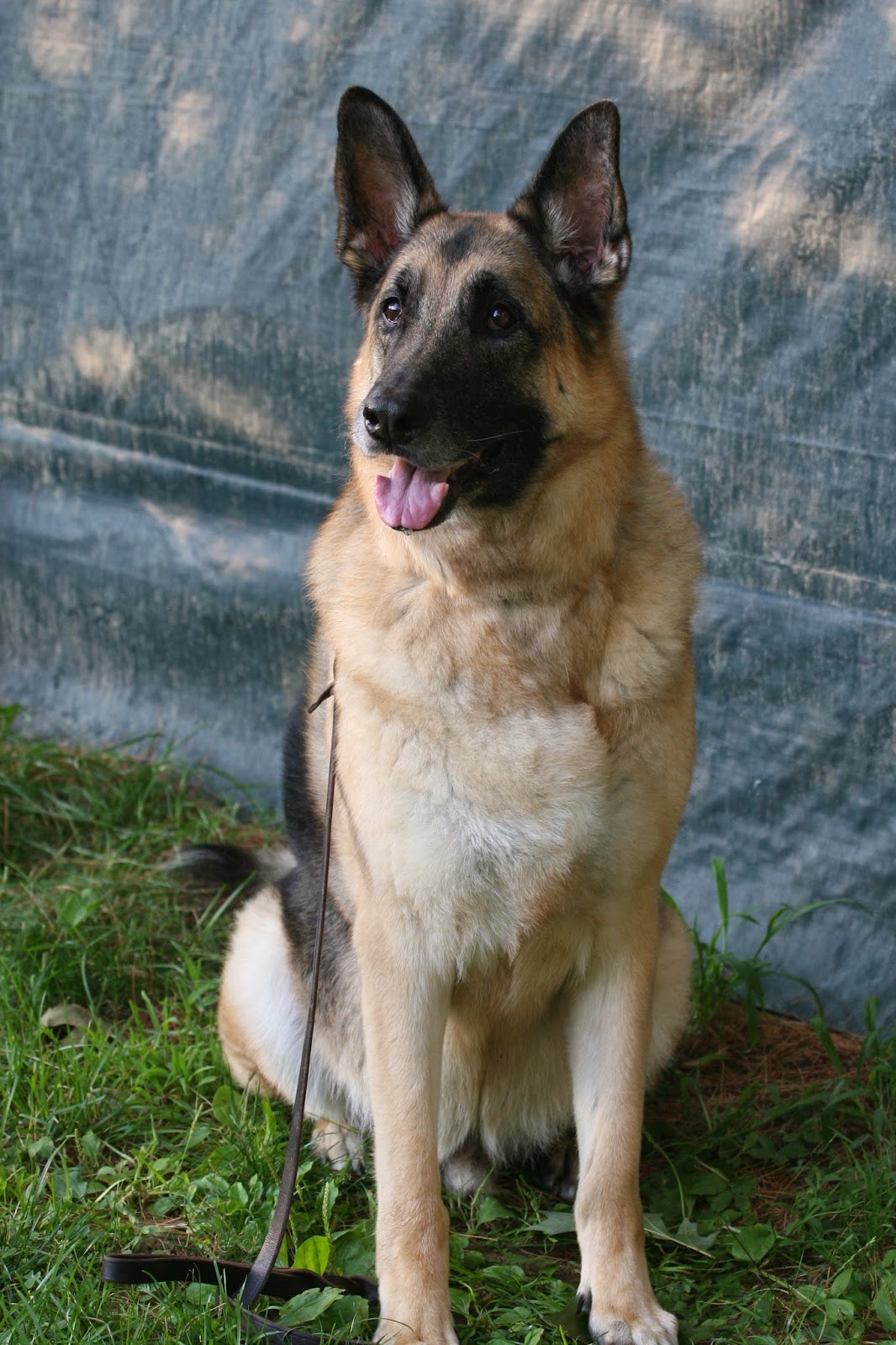 —THE SNOW HAS STARTED TO MELT! My driveway has stopped resembling a bobsledding track. I can almost open the gate to the backyard again. And there's actually a spot in my yard where you can see grass. Sure, it's a very small spot, but it's still grass and you can still see it. I know it's been spring for a while, but now it's starting to feel like it. Woo Hoo!

—Game of Thrones returns this weekend, and I once again have HBO so I can watch the new season. I've been re-watching some of season three when I have the time. It's fantastic—but really, Joffrey just doesn't get slapped often enough.

—And last, but certainly not least, while I was on my blogging break, I was the lucky winner of a massive book giveaway hosted by author Christine Rains. Not only did she gift me with a paperback copy of her complete 13th Floor series, but I also received novels from the following awesome authors:

That should keep me busy for a while. Thank you to you all.

That's going to do it for me today. Thanks for stopping by. I hope y'all have an excellent weekend. 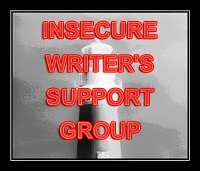 The Insecure Writer's Support Group is the brainchild of uber blogger Alex J. Cavanaugh. Its purpose is to offer insecure writers everywhere a safe space in which to voice their fears and offer support to others. Please click on the above link or the pic to the left for more information and a complete list of participants...

In my last IWSG post, I was freaking out over how well things were suddenly going in my never-ending quest to publish my first novel, Effigy. Today I'd like to continue that freak out.

Because this is a safe space, and if you're laughing at me (and, really, why wouldn't you?), you're doing it in the privacy of your own homes or workspaces or wherever it is you get on the internet, and I can't see you doing it. Unless you start sending me videos of you laughing at me.

But that just seems mean. And you're not mean.

So the last time I was freaking out on IWSG day, I was starting Effigy's "final" edits (still feel the need to add the quotes) and worrying about how well it all was going.

And I'm worrying. I'm worrying that I'm making all the wrong decisions. That my cover, as lovely as I feel it is, may not be the right cover. That I might choose the absolute wrong interior design. That my blurb (provided I actually settle down long enough to finalize it) is just wrong, wrong, wrong. I'm terrified that I have done and am doing everything wrong.

And I don't know what to do.

My significant other told me I just have to go with my gut. It's good advice, and I'm trying very hard to follow this advice, but here's the thing...my gut is also what told me it was a good idea to eat two boxes of Girl Scout cookies in a single sitting, so I'm not exactly sure my gut is the most trustworthy thing ever.

Maybe my gut does know what it's doing.

So here's my current plan: I'm going to keep pushing on. I'm going to ignore the worry like it's the boss at my day job, and I'm going to keep moving forward. I have a list of everything that's left to do (unless I've forgotten about something...Damn! Now I have to worry about that too!), and every day I shall endeavor to cross just one thing off that list.

Eventually I'll get there.

Unless I get distracted by Girl Scout cookies. Tagalongs, thou art my undoing. You too, Thin Mints.

That's going to do it for me today. Thanks for listening.