I'm totally stealing today's post from Patricia Lynne's blog (who found both it and the nifty badge HERE) . I saw this the other day (Monday?) and thought it would be fun and a nice departure from my ongoing series on How Not To Be A Writer. This is much more interesting. Who among us doesn't like talking about books? 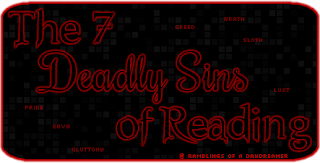 My most expensive books are probably my leather bound editions of Harry Potter and the Sorcerer's Stone and Harry Potter and the Chamber of Secrets. My mother found them for me somewhere. They look great sitting on my shelf. (I feel they're far too nice to touch. You want to touch a Harry Potter book? Use a paperback.)

My least expensive books are the free ebooks I download from Amazon on a regular basis. Most recently, the latest installment of Andrew Leon's Shadow Spinner serial.

Wrath: What author do you have a love/hate relationship with?

I probably have to go with Janet Evanovich here and her Stephanie Plum series. (Thanks to Marie for reminding me of this) The series was great at the start, and I really, really enjoyed it. But I haven't liked the last few books very much at all, and I'm incredibly pissed off at the continuation of the whole Stephanie/Morelli/Ranger triangle. ENOUGH ALREADY. Sadly, I am part of the problem as I continue to read each and every book. I can't help it. Once I start a series, I'll finish it. Even if life is too short for such things.

Gluttony: What book have you devoured over and over with no shame whatsoever?

There are a few books I like to revisit at least once a year (if I can). The top three series are:

Sloth: What book have you neglected reading out of laziness?

I haven't yet read A Dance With Dragons by George R.R. Martin. Part of it is the time that would be required, but I think a larger part is that it's such a huge book and my wrists ache just thinking about holding it that long. I'd invest in a ebook version, but it's currently outside of my ebook price range (I perhaps stubbornly refuse to pay more than $8.99 for an ebook).

Pride: What book do you talk about most in order to sound like an intellectual reader?

Lust: What attributes do you find most attractive in male or female characters?

I like flawed characters. Perfect characters are boring. Imperfect characters are awesome. I like a hero/heroine who screws up on occasional or, perhaps, all the time. The three series I listed above? I adore them because I adore their characters. Harry Potter is, from time to time, a big jerk—and I love that. Justin de Quincy is what I want my male characters to be. And Meg Powers (the MC of the President's Daughter series) is who I want to be when I grow up. Imperfections and all. I've said this before, and I'll say it again—character is everything.

Envy: What books would you most like to receive as a gift?

I'm happy to receive any book as a gift, but if John Green or Maggie Stiefvater wanted to send me copies of whatever they're working on now (even if it's just a grocery list), I'd be more than happy to accept. Or if Sharon Kay Penman wants to send me more Justin de Quincy stories (it would seem her publisher won't release any more because they don't view them to be as profitable as her other novels), that would be incredibly awesome.


That's going to do it for me today. As always, thanks for stopping by. It's always appreciated.
Posted by M.J. Fifield at 7:00 AM