As you may already be aware, I am an 80's child, so I am so freaking excited to talk about today's selection because it's all about some (please note the some. I can't possibly cover them all because then we'd be here for three days) of my favorite movies from that decade.

Let's get started because I can't wait anymore! 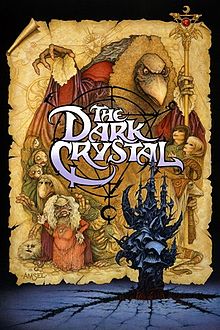 
I'm pretty sure I don't have to say anything more. I mean, c'mon! It's the Dark Freakin' Crystal, man! But I'll deliver the spiel anyway... this is a 1982 movie by Jim Henson and Frank Oz and features some pretty damn awesome muppets. Puppets? Animatronics? Whatever you call them, they're awesome.

The plot centers around a young Gelfling, Jen, who's on a quest to find a missing shard of a magical crystal in order to save the world from the evil Skeksis. Along the way, Jen meets another Gelfing, Kira, and her rabid pomeranian, Fizzgig (just kidding about him being a pomeranian. He just really looks like one). Eventually they encounter Aughra, the Keeper of Secrets, and ride weird-looking things called Landstriders and then (spoiler alert!) they save the world.

But it's not easily done and there is some pretty intense, scary stuff to be found along the way, but I think this is the film that really inspired my love of all things fantasy.

Aughra: Where is he?
Jen: He's dead.
Aughra: Could be anywhere then. 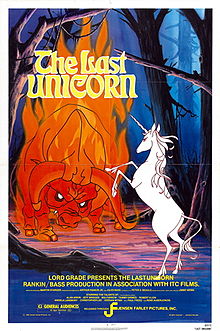 Released the same year as The Dark Crystal, this animated film (based on the novel by Peter S. Beagle)  cemented my love of all things fantasy. I honestly don't know which one was released first, but it doesn't matter. 1982 is the year I fell in love with fantasy.

This movie features the vocal talents of Mia Farrow, Jeff Bridges, Angela Lansbury, Alan Arkin and Christopher Lee. It tells the story of a unicorn (Mia), a magician (Alan) and a woman (Tammy Grimes) on a quest to find what has happened to all the other unicorns. It's said the Red Bull (not to be confused with the horribly-bad-for-you energy drink) has chased them all into the sea. Along the way, the unicorn is accidentally turned human and then accidentally falls in love with the son (Jeff Bridges) of the evil king (Christopher Lee) who controls the Red Bull.

Unicorn: I am no longer like the other, for no unicorn was ever born who could regret, but now I do. I regret.

Molly: Why must you always speak in riddles?
The Cat: Because I be what I be. I would tell you what you want to know if I could, mum, but I be a cat. And no cat anywhere ever gave anyone a straight answer.

Unicorn: I cannot change you into something you are not. I cannot make you a real magician.
Schmendrick: Ah it's okay. Don't worry about it.
Unicorn: Oh I won't. 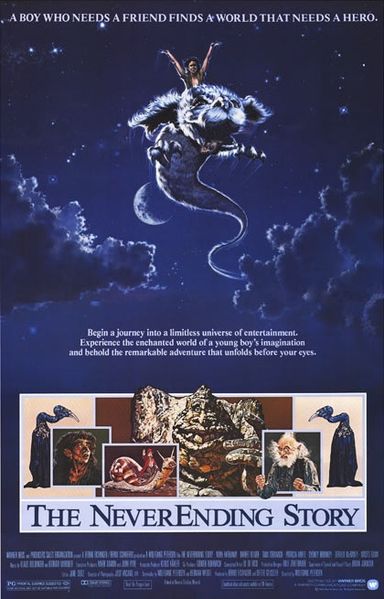 
Released in 1984, this movie tells the story of tormented school boy, Bastian. One day, while escaping from bullies, he ends up in an old book store and ends up "borrowing" an ancient story book. He spends the day hiding in an attic reading the book and is drawn into the fantasy world of Fantasia which, of course, is in need of saving.

This movie had a huge impact on me. Atreyu (portrayed by Noah Hathaway) and his horse, Artax, were the coolest freaking thing ever. I wanted to be the female version of Atreyu so damn badly, I spent a lot of my formative years running around with a homemade bow—a slightly curved stick and some kite string— on my back (I occasionally still do this. I can just afford better weaponry now). And the scene where (SPOILER ALERT) Atreyu loses Artax in the Swamps of Sadness still depresses the hell out of me. Just thinking about it now is making me a little misty-eyed. All right, fine, a lot misty-eyed. But I'm sure I'm not alone.

This movie thrills and delights and makes you hold your breath and gasp and yelp and all those kind of things. The part with the wolf near the end scared the bejeezus out of me when I was younger and still makes my pulse race today. And the very end, with Bastian and Falcor remains just a very cool moment in cinematic history. 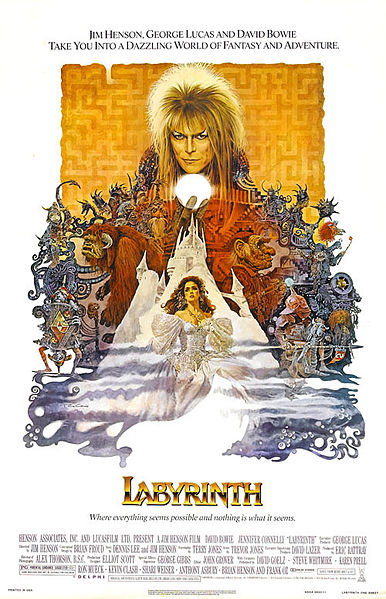 
Last, but not least, is this 1986 movie featuring Jennifer Connelly as Sarah the girl on a mission and David Freakin' Bowie as the Jareth the Goblin King. It has some awesome muppet action, some very cool songs (yes, that are on my iPod) and dances and endless quotable opportunities (at least if you're me).

The goblins come and take Sarah's baby brother away so she goes after him. She's given thirteen hours to navigate her way through the labyrinth. If she doesn't make it, Jareth will keep her brother. Along the way, Sarah encounters some strange places (the bog of eternal stench, anyone?) and meets a varied cast of colorful characters including friends Hoggle and Ludo, the Fierys, the Doorknockers (one of us always lies and one of us always tells the truth...), and more!

And did I mention the songs and dancing? Here's a prime example...

Since I can't possibly top that, I'm going to end here for today. Be sure to tune in tomorrow when I talk about some other movie genre that I love. Will it be superhero/comic book movies or spy/secret agent movies? Or something else I haven't yet thought of?