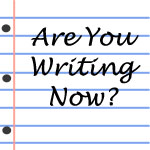 Oh hey, would you look at that.  It's the end of July.  The end of freaking July— am I the only one thinking maybe it shouldn't be the end of July already?  That instead it should really be just the middle of July?

As it is, unfortunately, the end of the month, it's time to look at the writing goals I set for myself at the start of July and own up to just how much I didn't accomplish my goal.

Here's what I set out to do in July:

And here's what I actually accomplished in July:

1.  Effigy is currently sitting at 535 pages.  I have edited approximately 498 of these pages which means I have approximately 37 left to go.  I may even finish them by midnight tonight which would mean that, technically, I have, in fact, accomplished this rather important goal, but I highly doubt I'll prove to be that efficient.  This is me we're talking about, after all.

2.  Well, this goal probably depends upon whom you ask.  But to be on the safe side, let's just not ask anyone, okay?

That said, let's take a look at the goals I'm setting for August:

1.  Finish editing those 37 (or so) pages.
2.  Get entire manuscript into the hands of a copy editor.
3.  Do not go crazy while waiting to  hear back from said copy editor.
4.  Stop putting off the whole cover artist thing.

One of these days, I swear I'm going to set a goal to sleep twenty hours a day and watch television the other four.  But until then, I'll work on these.  Hope y'all are doing well.  See you next time...

Came across this cartoon on the internet and as it resonated deeply with me, I thought I'd share it with you: 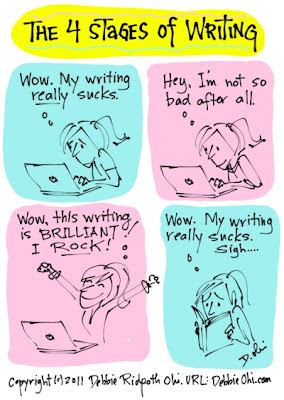 If you'd seen my tweets, you'll know that yesterday I was very much in Stage One but I feel like I might be transitioning into Stage Two.

In Which I Stop Ignoring My Blog

You may have noticed I haven't been around for a while.  Maybe you didn't.  I don't know but today, I am easing back into things.  I even commented on someone's blog today.  And once I've completed my scheduled yoga and aerobic workout, I just may comment on more.

Oh boy.  Things are getting crazy around here, I know.

And the fun just keeps on leaving, I know (and bonus points for anyone who can Name!  That!  Reference!)...

First of all, I've spent some time precision folding denim at The Store.  That's right.  Management finally got desperate enough to put me on the schedule.  Wanna know why?  It wasn't just because all the denim in the building needed to be refolded and I am, sadly, the only one on staff with the skill set to do it.  It was also because more than half the staff has quit.  They couldn't take it anymore so they skedaddled.  The only people left are the long time employees, the ones who can't afford to quit because doing so will mean taking a serious pay cut.

And while things at The Store have been less fun than usual, we're still managing to amuse ourselves.  Management's recently hired two new girls so the rest of us have started a pool as to when they're going to quit.  I have two weeks.  That's how long the last new girl lasted.

Second of all, I attended my monthly writers group meeting.  The one with my new arch-nemesises-ses (Name!  That!  Reference!), Ego Man.  Ego Man, our resident expert on everything, particularly things about which he knows nothing.  Ego man, who joined our group saying he was both unwilling to give or receive feedback.  Ego man, who always follows my readings by making "jokes" about wanting to steal my work.

I don't know if that comes with a cape.  If it did, I'd probably strangle him with it.

But I'm really a very nice person.  I swear.

Anyway, Ego Man left the latest meeting a little early and it was then that I realized the most beautiful thing.  I am not alone in my Ego Man irritation.  Everyone else in the group is in that same boat.  They're just as annoyed with him as I am.  They're just as pissed off at him as I am for dismissing my book as a failure solely based on its length.  And for planning to steal what I've written.

I feel a revolution in the air.  Change is gonna come!  Or maybe we'll just change the date and time of the meeting and forget to tell him.

Well, I'm running out of time here this morning so I'll close out today's come back blog with one funny short story from that same meeting.  I read an excerpt from my WIP (after Ego Man had left.  I don't read anymore when Ego Man's in the room) and one member had this to say about it:

"Oh, M.J., I really enjoyed this.  It reminded me of The Hunger Games.  I didn't think that was very well written."

In Which I Review Books

Here's what I read during the month of June:

Summer’s Passage- Julie Kagawa- A novelette that takes place between The Iron Queen and The Iron Knight.  The best thing I can really say about this is that I was able to download it for free.  Puck’s dialogue gets worse and worse with every story.

The Iron Knight- Julie Kagawa-  The final book in the Iron Fey series.  At least as far as I know.  This book should’ve made me swoon with delight because it was Ash’s POV, Ash’s story, and he’s been the majority of the reason why I’ve stuck with this series.  But I just didn’t love it.  I was stuck by large bouts of “is this thing over yet?”  And maybe that’s my fault because I went though the entire series like wildfire or something and I wouldn’t have gotten tired of the story if I’d only spread them out.

The House on the Corner- Andrew Leon-  The mostly first person edition and the start of an intended series.  So, I want to start off by saying something that is probably going to sound horrible (though I don't mean it to be) but it was a prevalent thought in my head at the start of this book, so I'm going to do it.  This book made me glad I am just an aunt and not a parent because at the start of this book, the kids are annoying.  That said, let me add that they're very well written because I know siblings are like that.  I have three of my own (siblings) and we were like that growing up and we're occasionally still like that even though we're all in our thirties now.  Anyway, each chapter rotates between the three kids.  At first I didn't realize the narrative had switched from Tom to Sam and spent a little time confused as to why Tom was referring to himself in the third person but then I caught on that the shifts were in order: Tom, Sam, Ruth until a switch to the third person POV near the end of the book.  In the author's note following the story, he says scenes in between each chapter featuring the three kids arguing  amongst themselves as they tell the story were cut  because many of the adult readers found these scenes to be jarring.  Without having read them, I have to say I likely would have found them jarring as well.  The story does start off slow but I knew it would and so was fine with it.  The action picks up with the chapter called "The Imagination Room".  After that, it feels like a sprint to the end.  I read a review of this book that called it "Speilbergian" which I found to be a perfect description.  I believe the target audience is the young adult crowd but it will definitely appeal to adults— especially those with a love of Star Wars, Narnia, Dungeon & Dragons, Lord of the Rings, and the like.

Gone Girl- Gillian Flynn-  I loved Gillian Flynn's first two novels, Dark Places and Sharp Objects.  She know how to create characters and scenes.  Her ability to craft words is outstanding.  Beautiful, dark fiction.  Gone Girl is no different.  This book is all kinds of crazy and the end is really quite disturbing.  I got to a point where I couldn't put it down, I had to keep reading because I had to know what the hell was going on.  I read a review of this book which says the end punches the reader in the gut and boy, was it right.  I was stunned by how it ended.  A lot of people hate the ending and while I definitely don't love it, I love the fact that Gillian Flynn was brave enough to end the story that way.  One of the very best books I've read all year.

Impact- Danni Foley-  Not long enough.  I know this is the start of a series and so there's more story to follow but it ended very soon and I want to know where things end up.  We're introduced to a wide variety of characters all experiencing some form of upheaval and when the story comes to an end, things are still... upheaved?  Is that a word?  Anyway, I want to know the resolution.  Yes, there are many typos but the author is aware of this.  I also appreciated the humor and the pop culture references but where were the Firefly references??  Did I miss them?  Maybe they'll be in the next book...

Changeling- Phillipa Gregory-   Phillipa Gregory has long been one of my all time favorite authors.  She writes beautiful historical fiction that I admire oh so much.  This book is the first in a YA series.  But I did not love it.  I know she's setting up a series for young adults but the book was too slight and flighty, I guess.  It started off very well, I think, in the way it introduced the two main characters but once those two characters met, things started to go downhill.  The mysteries were kind of transparent and the main characters became very flat and uninteresting.  One of the secondary characters was my favorite so here's hoping he has a much larger role in the next book.

Rapture- Lauren Kate- So, I’ve been very ho-hum about this entire series and yes, I read the entire series because I am a freak that way.  That’s been well documented.  And while I wasn’t a fan of the series, and I’m not really a fan of this book, I will say that this novel surprised me.  It took three books and three hundred pages to do so but it surprised me.
Posted by M.J. Fifield at 12:15 AM 25 comments: