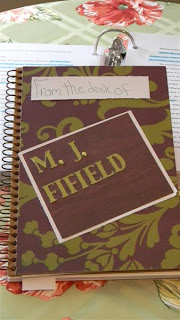 Before I begin, I just want to say that the notebook pictured on the left was made especially for me by my beautiful and talented goddaughter. Isn't it awesome?

And now, I present today's blog...

I am a visual learner. I'm absolutely lost in lecture style classes because I cannot stay focused on the speaker. No offense, speakers of the world. It's just if I'm left sitting with nothing to do but listen, chances are I'll soon be drifting off to Planet M.J. where the sky is a lovely lilac, the sun always shines and the faucets dispense hot and cold running chocolate.

In order for something to stick with me, in order for my brain to work something out, I need to see it. I need to read it or write it or touch or some combination of all of the above.

So this week (before The Store hijacked my existence... more on that in a minute) when I endeavored to find a place to stick those new scenes I've been working on (oh so many jokes...so little time), I had to commandeer my dining room table to get it done. This meant displacing my very rude and unsociable cats. They were not pleased which means that later they'll extract vengeance but hey, I needed the space and while I do loathe to make my cats irritable, some times you just have to do what you have to do.

I first tried out this story board technique a couple of summers ago when I was trying to write a synopsis for Effigy. I had some great stuff written but the transitions were crap so I printed out a copy of the synopsis and cut it up into paragraphs and spread it out on the dining room table (it's the only surface large enough because while I do have a six foot bulletin board in my office, it's covered with maps and calendars and mock cover "art"). Then I took blank strips of paper and placed them in between the transition-less paragraphs. And for some reason, this actually worked. I was able to better see where the holes in my synopsis were and how to fill in those holes.

And there was much rejoicing.

Here's what the dining room table looked like earlier this week: 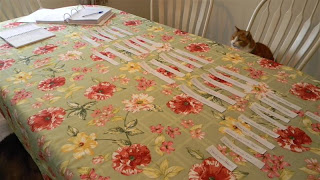 Fat Cat, waiting for me to leave long enough to reclaim her table.
The dark blob in the lower left hand corner is Big. He's never met
a table he didn't like to lay under.
Each slip of paper is an über brief description of a scene that probably wouldn't make sense to anyone who isn't me (but let's be honest...there's a good chance the finished product won't make sense to anyone who isn't me). My task was to arrange them into an order that made sense. I like flow in storytelling. I like one scene to lead into the next with a great line that might tie them together. It doesn't always work out that way but I always aim for it.

And I think I just may have figured it out (Except for that one scene that doesn't quite fit anywhere and yet is kind of vital to the rest of the damn book). Of course, the solution involves the creation of an entirely new freaking chapter. It also involves the creation of two (maybe three. Or four...) other scenes. I know these scenes need to be in the book. I'm just not exactly sure what those scenes need to be yet.

Yeah, I don't get it either.

But puzzling that out has had to take a spot on the back burner as I've spent most of this week not writing but rather working at The Store. It's my fault. I was the one who (a) answered the phone and (b) thought, "I guess a paycheck wouldn't be the worst idea ever."

I really need to quit my day job. Preferably before Superbowl Sunday.

Wishing you all a productive end to your work weeks...
Posted by M.J. Fifield at 1:00 PM