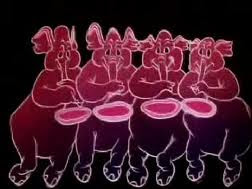 But it's not going well. It's like I'm detoxing or something. I'm going to start seeing pink elephants marching in and out of this room any minute now. But until then, here's a couple of lists I've written for you:

Things I Should Be Or Could Be Doing While On Hiatus

1. Learning to use my new smart phone. Yeah, that's right. I have a smart phone. Seemed like a good idea at the time. Now I don't know what the hell I was thinking. I'm sure it'll be fine once I figure out how to use it but right now it's just making me feel stupid. Really, really stupid.

2. Weeding the garden. Yeah, that's right. I have a garden. Well, at least I think I do. I assume it's that thing underneath all the weeds. I'll let you know if I figure it out.

3. Getting caught up on my quality recorded television. Four episodes of Merlin, four episodes of The Vampire Diaries and this week's episode of "How Not To Be A Spy" (also known as Covert Affairs)...that's almost an entire day right there! Especially if I watch all the commercials too.

4. Decluttering the basement. That's right. I also set other goals at the beginning of the year. This would be one of them.

6. Painting the bedroom. Still needs to be done. But, God, I hate painting.

7. Meditation. My stress level might be a little high right now. Just a little. I tried a yoga pose that the sadistic Wii Fit said would melt away stress and, for a while, it worked but only because I was in too much pain from the ridiculous position into which I had contorted my body.

5. Biting my nails down to the quick.

6. Screaming at people and their dogs to get the hell of my new lawn.

7. Grumbling about people and their dogs on my lawn.