I Make My Own Fun 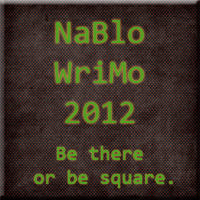 (BONUS POINTS to anyone who can NAME! THAT! REFERENCE! which inspired today's title)


Today I had intended to share with you a sure to be brilliant post (inspired by the wonderful Tara Tyler) on book endings and my personal views on what makes these endings work or not work.  But, as it turns out, I need more time to work on this particular post so it's been bumped for now.  I know.  I'm a day late and a dollar short.  I'd just go ahead and make that my motto if I hadn't already decided on 'kick ass and eat brownies' (seemed cool).

So instead, I'm going to revisit a segment that originated last year during NaBloWriMo: the work haiku.  If you're new to the blog and/or don't follow my Twitter feed, I have a tendency to write about my day in haiku form.  It started as a way for me to keep my mind occupied during my day job at The Store.  It's since become a way of life.

I should probably apologize for that.

Especially because, depending on the shift, I tweet a lot of them.  And I tend to write a lot more than I tweet.  But just know that even with my constant composing and tweeting, I still get more work done than many of my co-workers combined.

Well, maybe you didn't need to know that.  But it is true.

Anyway, here are the best from the latest batch of work haiku.  Sorry if they're ones you've seen before. But don't lose hope.  We're going into the busy season so there'll be plenty of material to draw upon in the future.

Wait... why are you running away?

my boss just offered
to run and fetch me donuts
what's happening here?

New guy says to me,
"They told me you were messy."
I'm also quite mean.

New guy seems to be
afraid of making eye contact
can't imagine why.

the new manager
caught me tweeting that haiku
I'm in trouble now.

what the hell happened
to my neat and clean stockroom?
heads are gonna roll.

to my co-workers:
you may request my help but
you won't demand it.

on paper you're boss
but it's better if you don't
tell me what to do.


to my manager:
I can't be bribed with candy
try brownies instead

precision folding
is such a stupid talent
wish I could juggle

And just one last poem before I head off to work...

Attention shoppers:
the stock girl will lose her mind
if you don't leave now

That's gonna do it for me today.  See y'all tomorrow!