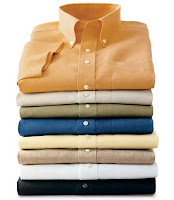 Gather 'round, children, because it's Extended Metaphor Day on My Pet Blog! (Please hold all applause until the end...)

One of the more tedious aspects of my retail life is precision folding. If you're unfamiliar with the concept of precision folding, pat yourself on the back because obviously you didn't go wrong in life the way I did. But seriously, it's when one poor sap (i.e. me...) is tasked with taking a display of some article of clothing (in my current retail setting, that clothing is jeans. Piles and piles of jeans) and folding and refolding them in a perfect uniform way. Hence the picture on the left. But please note that when I precision fold displays, they look better that the picture on the left but that picture is the best a Google search could offer me.

I used to have a picture of the towel display I folded at The Store Before The Store. It took me six hours to finish. Sure, some of that time was spent discouraging customers from touching the display (I got what they wanted from the stockroom) but most of it was devoted to making sure that each and every towel in that wall was folded perfectly.

Because the thing with precision folding is that you can't half ass it and still consider it precision folding. You just can't refold the messiest three or four piles and call it good enough because the rest of the piles then stick out like very sore thumbs. If your objective is perfection, everything in that display needs to be retouched. Every single towel in that display had to be taken down, unfolded, shaken out, smoothed out and then refolded. That newly folded towel needed to be fluffed and carefully placed in its stack. Then each refolded stack had to be shifted forward, backward, left, right— whatever to make sure that all rows are uniform and the spaces between them are the same and so on and so forth. 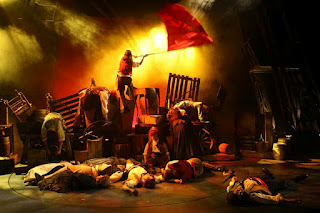 It's time consuming (it seriously took six hours) and it's tedious and your back hurts and you want to punch your co-workers in the face because they're all standing around watching you fold and refold towels while not folding anything of their own and you want to trip up that one customer who's making a beeline for your display because no matter how many times you ask if you can help her, she still says no while she's pulling the middle towel out of the stack, destroying all your hard work while being completely oblivious of the Medusa stare with which you're fixing her. Then you start screaming about stupid Sisyphus and his stupid rock and his stupid hill and make plans to build a barricade in front of the display out of the folding tables in order to keep everyone away from what you're trying to accomplish. Then you stand on top of the barricade waving the French flag around until your boss calls the nice men with the giant butterfly nets to come and take you away (to the funny farm where life is beautiful all the time).

Or is that just me?

Anyway, it— the process— sucks. Big time. But eventually, it does come to an end. Maybe you've finally snapped and killed that one customer or maybe you've just finished. And then you stand back and you look at the whole display and just as you're about to congratulate yourself on a job well done, you see that one stack needs adjustment. So you go back and do that then stand back once again. And see another stack that needs just a little more attention (any of you savvy, savvy writers see where I'm going with this?), and then and then and then...

This is my current predicament with my writing. I've finished all the scenes and filled all the empty spaces and gotten rid of all the post-it notes requiring my attention. So this should be the part where I'm running through the streets with a boombox over my head blasting "We Are The Champions" because at last I have reached the promised land. But instead it's become the part where I'm looking at other scenes that I thought were good enough until I refolded the scenes surrounding it. So I give those scenes a fluff and then then the next crop of "not good enough" pops up.

I think we've been here before. I recognize that tree. (Name! That! Reference!)

This is my current plan to deal with my current predicament: Stop. After today, stop. Take a nice long weekend where I do not look at my manuscript in any way, shape or form. Then, after the weekend, give Effigy one last read through. Tweak anything that obviously needs to be tweaked and then (and this part terrified me, but not for the reasons you might suspect) put it in the hands of my betas. Or beta. I'm not exactly sure how many betas there are. Or will be. Or even if I'll work up the nerve to give the whole beta thing another go.

But that's a problem for another time. Like June.  Until that time, I hope everyone has a fabulous weekend. And to all you Americans out there, have a wonderful Memorial Day.
Posted by M.J. Fifield at 2:23 AM