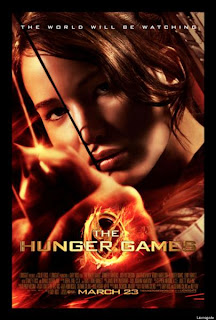 This post is a review of both The Hunger Games movie and the audience with which I saw the film. As such, there is the distinct possibility that spoilers will abound from here on out so if you're a spoileraphobe, you may not want to read this review. Please consider yourselves warned.

You should also be warned that I'm running on about two hours of sleep so my normal level of incoherence will likely be magnified.

So, now that I've gotten that out of the way, allow me to say Happy Hunger Games.

I went to a midnight show last night (this morning? I'm so confused) because I love me a good midnight showing of awesome movies. I went to a midnight show for each of the Harry Potter movies and had the time of my life at each and every one. My Partner-in-Crime for most of these excursions was my sister, B. And as we are both fans of the Hunger Games trilogy, we decided to extend our tradition to this newest film series.

We arrived at the theatre three hours early and the line was already out the door. Fortunately, the odds were in our favor and Global Warming had provided us with a uber warm March day (seriously, it was 80 degrees on Thursday). The first person in line arrived at 3:30 that afternoon and had done so (so she claimed) because she didn't want to wait outside in the heat. But as she's also the woman who was twelve hours early for the last Harry Potter film, I'm not sure we can take her at her word.

Anyway, we got inside the theatre probably around 10:15 and managed to get seats. There were a lot of roaming bands of teens who needed a good slap upside the head making this process much more difficult than it needed to be. I say this while wholeheartedly acknowledging the fact that when I was a member of one such roaming band of teens invading Disney movie premieres, I probably needed a good slap upside the head as well. But whatever. We got fairly decent seats and settled in to wait. I had a copy of Catching Fire to help pass the time. B was re-reading The Hunger Games.

So while we sat there for an hour and forty five minutes waiting for the movie to begin, I came to the realization that there are so many stupid, stupid people in the world and, for some reason, they were sitting within earshot of me. What's the exact opposite of a brain trust? Because that's the group who surrounded us. At one point, I looked at B and said, "Next time, I shall buy out the entire theater so we won't have to deal with this." B's response was "Well, that won't be expensive at all..."

Sure. Be reasonable. Whatever.

There was a woman sitting in the row behind me who didn't even known The Hunger Games was a book. It wasn't that she hadn't read the book, it was that she didn't know there was a book at all. The two MENSA members sitting to my right hadn't read the book. And proved it by talking throughout the entire movie, making predictions about what would happen next and getting every last one of them wrong. I may have thrown some popcorn at them but that can't be proven.

And the squealing... oh my god the squealing. I've never gone to a midnight showing of a Twilight movie (AND NEVER WILL), but I imagine the squealing was on par with that. And this was before the movie even started. Every time a Hunger Games picture flashed on the screen during the pre show trivia, so many people would squeal. And then squeal some more. Then, when the movie actually played, they squealed every time Gale appeared on screen. All right, so I kind of wanted to do that too. I wasn't a member of Team Gale until I saw Liam Hemsworth. But I don't want him for Katniss. I want him for me.

Now, I've gone to several midnight shows and I love going to them because you know the people sitting with you are real fans who are real excited and it creates an awesome energy that makes the entire experience even more fun. And you clap and you cheer and hoot and holler and have a grand old time but this audience was an entirely different creature altogether.

An annoying creature on the level of Chamber of Secrets Dobby (not Deathly Hallows Dobby) or Jar Jar Binks.

Before Catching Fire comes out (they're filming it now...), I hereby promise to devise a short but accurate IQ test to administer to any and all people who ask me, "Are these seats taken?" because I did NOT pay ten dollars to be annoyed by annoying people.

One last thing about the audience: wanna see a group of people totally freak out? Pack a bunch of diehard fans (and the people sitting near me) into a theatre to watch an highly anticipated film and then make it just freeze right before the end credits start to roll. Cue giant gasp and then bring on the panic and chaos. This is what happened in our showing. The movie just stopped, like someone had pressed a pause button. Then the screen went black and then started to do that snowy thing that indicates your cable's out.

The audience did not deal with this well. People (not me) were out of their seats, yelling to the projectionist. People in the back row were banging on the glass. People ran out of the theatre, presumably to track down some sort of theatre employee or go on some kind of killing spree— hard to say, really.

B and I just sat in our seats and waited to see what would happen. Eventually things started up again and for a while we thought they were started the entire movie over again. Then it disappeared and came back on later in the film (Katniss's fight with Clove at the Cornucopia— an awesome scene by the way) and then disappeared once more and popped back up at Katniss and Peeta's fight with Cato (another awesome scene) and ran from there. This time we got to see the end. The whole thirty extra seconds. But hey, we didn't know that's all there was. There was much hilarity from the audience at this point. It was funny.

But enough about the audience. Let's talk about the actual movie because I did say I would do that. This would be the part where you really have to worry about spoilers.

*IF YOU WANT TO AVOID SPOILERS, STOP READING NOW* 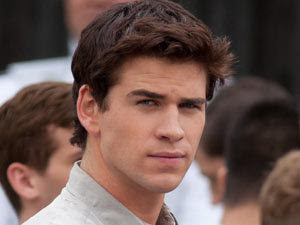 I thought it was well done. I enjoyed the cast (especially Liam Hemsworth. Hello, salty goodness!). I think Jennifer Lawrence was a fantastic Katniss. Elizabeth Banks is mostly unrecognizable as Effie Trinket and Lenny Kravitz makes a great Cinna. Woody Harrelson was wonderful as Haymitch. Obviously, there were cuts and changes and, for the most part, I was cool with them.

One of the biggest changes was the ability to see the Gamesmakers making the game. They showed a control room where the tributes were tracked and the twists (such as the fire that drives Katniss back toward the pack) were implemented. There were additional scenes with President Snow (played so well by Donald Sutherland) that helped establish the effect Katniss was having on Panem. After Rue's death (which made me cry), they showed a riot in Dictrict 11 which played out so beautifully (even if the first thought in my head was Jayne Cobb's voice saying, "y'all had a riot? On account of me?"). I've read the books multiple times and I was still so worried and tense. There were scenes of Haymitch working the Capitol population to help Katniss. His notes included with Katniss's gifts are a riot. We were able to see the members of District 12 watching the Hunger Games. At the end of movie, there's a scene with head Gamemaker, Seneca Cane, that alludes to his death that's only mentioned in Catching Fire.

But with all the goodness, there were three scenes near the end that I thought were lacking the emotional punch the book had. The first scene was Katniss and Peeta's time in the cave. It was significantly reduced for time purposes, I assume, but I think the Katniss/Peeta dynamic suffered because of it. The second was Katniss and Peeta with the berries. It just felt more powerful in the book. The third was Katniss and Peeta's post Hunger Games interview. The interview in the book was so much more powerful and meaningful I wonder why they didn't pull more of the dialogue straight from the pages.

Overall, it's a good movie. Yes, there's violence and the film makers don't shy away from that. The movie's rated PG-13 so it's excessively gory or anything but they don't flinch. There is some herky jerky camera work used during the fight scenes so if you're prone to motion sickness, be prepared for that. There's one moment, toward the end, involving the muttations that make just about every last soul in the theatre jump right out of their seats.

I'm going to see it again Saturday night. I wonder if I shall jump out of my seat a second time. I wonder how annoying the audience will be... Here's hoping the odds will ever be in my (and yours) favor.